An interview with Silvia Medaglia, Agile Transition Coach at Philips

“The one who survives is the one who has adapted”

“Other banks no longer turned out to be the main competitors, but tech companies that have data.”

“Walls and whiteboards are therefore essential.”

In 2015, ING was one of the first large Dutch companies to switch to Agile. Silvia Medaglia was working at ING as a project manager at the time, which is why she is experiencing the transition from within. The philosophy behind the Agile way of working appeals to her, which is why she continues her career at ING as an Agile Transition Coach. Agile has now become so established at ING that Silvia is happy to be of service to the next organization with her knowledge, experience and motivation. And that is Philips, who recently started with Agile, starting in the Digital Marketing department. What, according to Silvia Medaglia, is the need for organizations to make the transition to Agile?

“I can best give you an idea of the necessity that ING saw at the time. As a project manager I have been involved in the development of financial products. In the “old-fashioned” way, such a period of devising and realizing, for example, a new mortgage took far too long, because various departments, and therefore far too many people, were involved. Being able to act faster was no longer a wish, but a necessity. ING realized that if it did not dare to transition, and did not follow an example from hypermodern companies like Spotify, it would lose a battle in various areas as an organisation. Not only against competitors, but also in relation to own talent. Other banks no longer turned out to be the main competitors, but tech companies that have data. Theoretically, a large data organization could start a bank. So things changed course radically and ING officially became an IT company with a banking license. Talented employees, with the intrinsic motivation of an entrepreneur, no longer received only appreciation via the monthly salary, but were given responsibility for their tasks in accordance with the Agile philosophy. In this way, a relatively slow company became a flexible, agile organization in no-time. As an Agile pioneer, ING has gained an excellent reputation. Thanks to their new “mindset”, ING has won this battle for the competition. And what applies to ING also applies elsewhere. 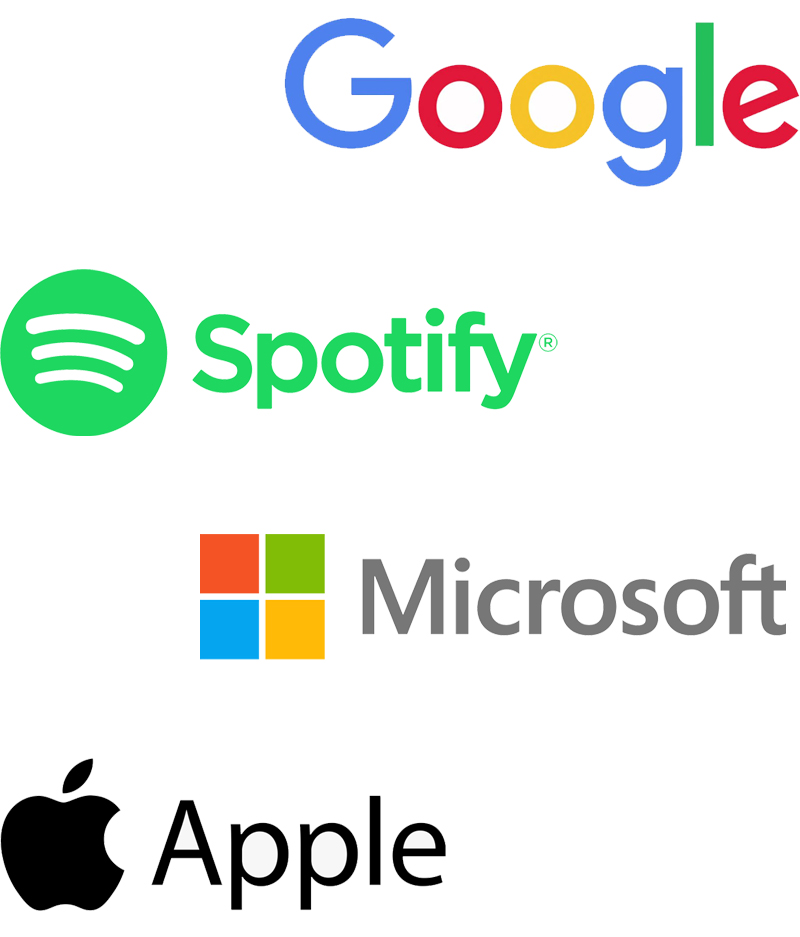 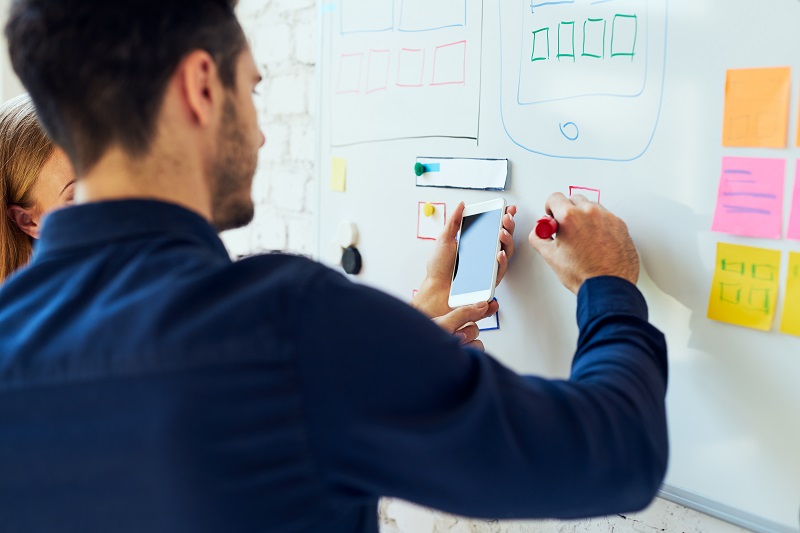 END TO END
Agile brings employees from different disciplines together in a team; including the IT developer, the marketer, the communication specialist and the sales person. They become responsible for the product end to end. In this way you eliminate dependence, which previously consumed time, and therefore money. In Agile working, the customer is constantly involved. Tomorrow, customers needs can totally differ from today. You therefore build a prototype of his assignment, which you can expand further or not – continuously depending on what the customer wants. Customers are diverse; an internal colleague department, an external company, an individual or an entire population. Thanks to various Agile techniques, you quickly find out exactly what the customer wants. In short, Agile is maneuverability with the aim of delivering customization on demand. If you don’t, fellow companies will respond to the demand. In the end, profit organizations have to make money. ”

WALLS EN WHITEBOARDS
“As a convinced, motivated Agile leader, the ‘what’ and ‘why’ belong to you and the ‘how’ to the team members, who are the real specialists. The Agile coach ensures that this new way of working pays off. Agile works best when you are together. An inviting, inspiring office design is therefore crucial, as are various tools that allow you to visualize your ideas, plans and progress. Walls and whiteboards are therefore essential. A common mistake in office design is that too little space is created for an obeya room and for meeting rooms of different sizes. Including a meeting place for effective, standing meetings. These square meters are necessary for the interactive types of work. With Agile you constantly move around the room and that greatly improves mutual communication. Never underestimate the coffee area as a meeting place either; we make a lot of decisions in a relaxed atmosphere. In my opinion, the function of the office will only become more important for everyone who works Agile. For the coming period we need a healthy mix between working at home and at the office. Some sessions, such as going through practical matters one on one, run perfectly online. Sessions with interaction, reflection and awareness can only take place physically in the office, because they really involve going into depth together.” 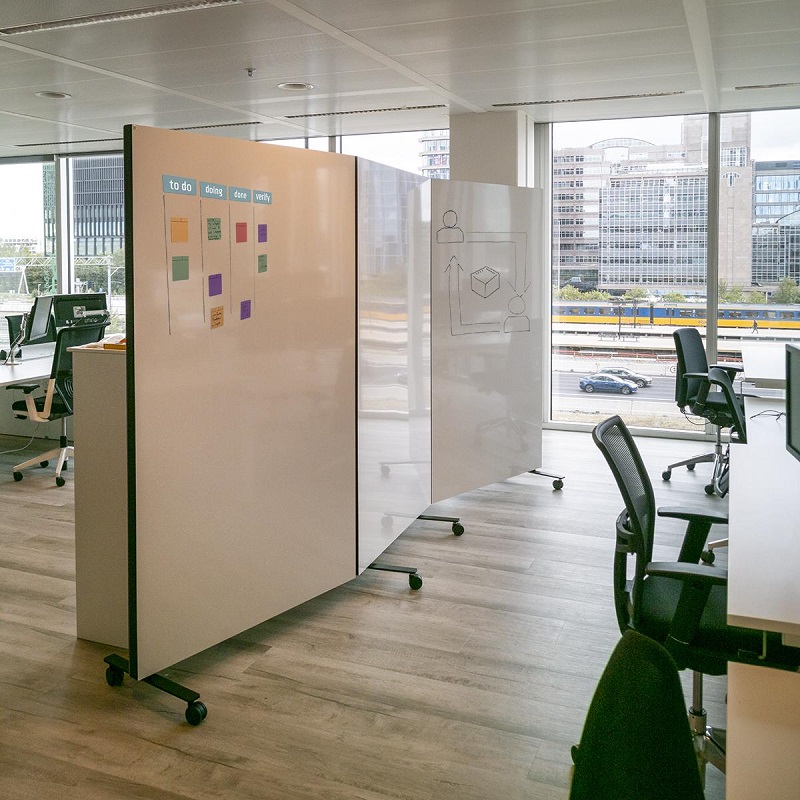 RISK
“Working from home still carries a risk, which I worry about from time to time. We are dealing with very capable, introverted employees who find working from home more pleasant than at the office. The extroverts, on the other hand, will always choose to come to the office. So I expect companies to face some form of “division” because of this. People who are more introverted, are less visible for colleagues when they work at home. Relationships however are built mainly face to face. Introverted home workers therefore run the risk of not being visible enough within their network. I hope that these people and their organization will be focussed on that issue, because fantastic, introverted employees must of course be given the opportunity to take the next step in their career as much as their extroverted colleagues. ”

AMBITION
“You can apply Agile to any company in various ways. From an SME with roughly 20 employees to large, international companies such as Philips. It’s about the mindset, not the number of employees. The one who survives is the one who has adapted. To survive, you have to be agile, know your customer and keep the shared ambition in mind. A good example is the cleaning lady who worked at NASA in the 1960s. She was asked, “What is your job?” She replied, “I am taking people to the moon.” Every NASA employee apparently knew the “why” flawlessly and naturally contributed to the shared mission. ”